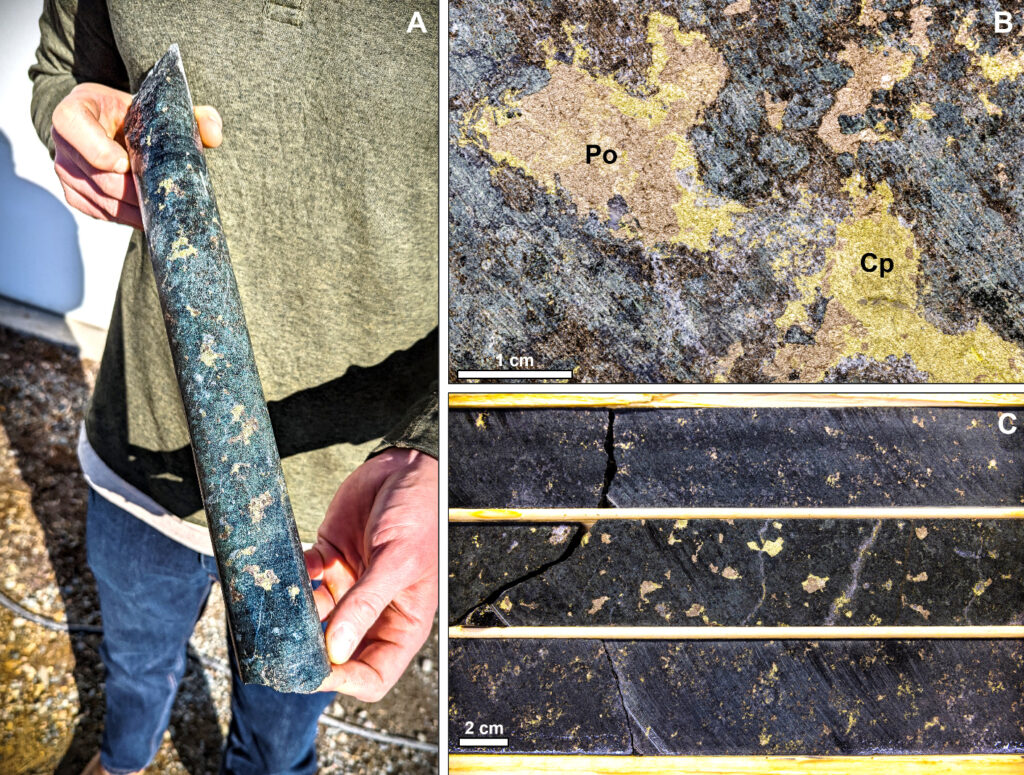 Gary DeSchutter, Québec Nickel’s Vice President of Exploration, remarks “I am very fortunate to have worked at several high-quality nickel projects during my career, including at a producing PGE mine, and I can honestly say receiving assay results like these from the Fortin Sill target is very exciting. I’m really looking forward to seeing what else the Fortin Sill target, as well as the rest of this great project, delivers in the coming weeks and months.”

The initial geological interpretation of the Fortin Sill showing is that of a Ni-Cu-Pt-Pd-Au-mineralized differentiated mafic-ultramafic intrusion. This interpretation is supported by observations that the contacts between the different mafic and ultramafic rock units are gradational in nature, as well as the occurrence of brecciated contacts between the mineralized intrusion and host mafic volcanic +/- metasedimentary country rocks. Summary assays results are provided below in Table 1 and photographs of drill core from QDG-22-09 are presented in Figures 1 and 2.

Sulphide mineralization throughout the 31-metre-long core intersection, which is interpreted to be of primary magmatic in origin, consists of sub-metre to multi-metre-wide zones of interstitial, finely disseminated to patchy magmatic sulphides with subordinate intervals of semi-massive to net-texture sulphides (pyrrhotite + chalcopyrite) intercalated with multi-metre-long intervals containing coarse to very coarse blebby pyrrhotite + chalcopyrite. Host rocks to the sulphide mineralization include mafic and ultramafic intrusive units including gabbro, olivine-bearing gabbro and pyroxenite, with the pyroxenite units having undergone significant greenschist metamorphism-related alteration, essentially turning the rock into a chlorite schist. Further down the hole beyond the Ni-Cu-PGE-mineralized intrusion, the remainder of the 225-metre-long drill hole cored through a mixed sequence of intercalated sheared mafic volcanic and metasedimentary rocks before terminating in a >23-metre-long interval of strongly sheared and quartz-carbonate-veined ultramafic unit that contains trace to locally 1% finely disseminated pyrite + pyrrhotite. The entire length of the hole has been sampled; however, assay results have only been received for the top 79 metres of the hole. 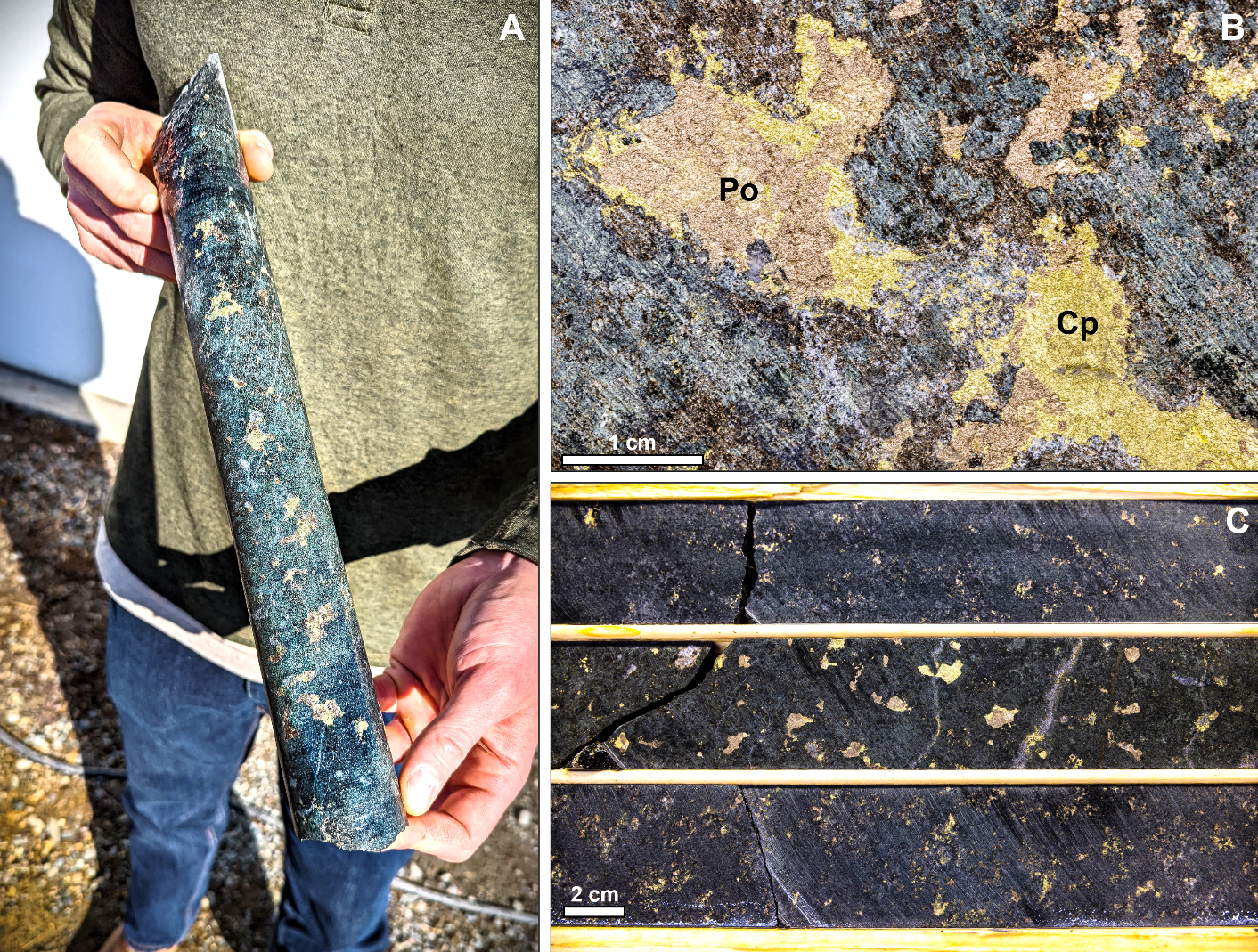 Table 1. Summary of assay results from hole QDG-22-091,2,3
1Reported assay intervals are sample length weighted.
2The true width of the mineralized intersection is not known due to insufficient information.
33E = Pt+Pd+Au

Additional holes are being drilled from the same set-up as QDG-22-09 to establish the continuity of the Ni-Cu-PGE-Au mineralization both on and off drill section and assay results will be reported from these holes once received. A drill hole to test the VTEMTM electromagnetic-magnetic anomaly, interpreted to lie directly beneath the Fortin Sill showing, will also be completed in the coming weeks (please refer to the April 27, 2022, News Release for details regarding this specific geophysical drill target). Additionally, Abitibi Geophysics, who’s head office is in Val-d’Or, is currently at the Ducros project completing time domain borehole electromagnetic surveys within several of the key drill holes completed during the 2022 work program to date. This borehole EM work is being done to follow-up on the semi-massive sulphide intersection in QDG-22-09 as well as to guide future drilling efforts towards finding additional accumulations of electrically conductive Ni-Cu-PGE-Au-rich sulphides in the Fortin Sill target area.

Additional drill holes are being designed to follow-up on these results and will be submitted for permitting in the coming days.

Core Processing & QAQC
Québec Nickel has implemented a quality assurance and quality control (“QAQC”) program for its drilling program, to ensure best practice for logging, sampling, and analysis of its drill core, and includes the regular insertion of geochemical blanks and two different Ni-Cu-PGE certified reference material standards (CRM’s) into the sample stream.

Drill core is collected by Ducros project personnel from the drill daily and transported to QNI’s core logging facility in Val d’Or in secured core boxes. Logging is completed on a laptop and data are captured using fit-for-purpose computer software. In addition to recording geological, structural, mineralogical, and alteration data, QNI personnel also collect Rock Quality Designation (RQD) data for all core runs, as well as Specific Gravity, Magnetic Susceptibility and Conductivity measurements at regular intervals. All drill core is photographed both dry and wet prior to sampling.

Core sample lengths typically vary between 30 centimetres to 1.50 metres, dependant on geological and mineralization contacts. Core destined for geochemical analyses is sawed in half by a diamond blade saw with clean uncirculated water, and one half of the core is returned to the core box for archiving while the other half is placed in labeled and sealed sample bags and sent to the laboratory for analyses. All samples are transported from QNI’s logging facility to AGAT Laboratories’ sample preparation facility in Val-d’Or in secured and numbered rice bags by project personnel.

AGAT Laboratories is accredited to the ISO/IEC 17025:2017 and ISO 9001:2015 standards. Analysis for precious metals (gold, platinum, and palladium) is completed by Fire Assay with an ICP-OES finish while analyses for nickel, copper, and 41 other elements are performed using AGAT’s 4 Acid Digest – Metals Package, with an ICP-OES finish.

QUALIFIED PERSON
Gary DeSchutter, M.Sc., P.Geo., Vice-President of Exploration for Québec Nickel Corp., and a Qualified Person (“QP”) as defined under National Instrument 43-101 (“NI 43-101”), has reviewed, and approved the scientific and technical content of this press release.

ABOUT QUEBEC NICKEL CORP.
Québec Nickel Corp. is a mineral exploration company focused on acquiring, exploring, and developing nickel projects in Québec, Canada. The Company has a 100% interest in the Ducros Property, consisting of 280 contiguous mining claims covering 15,147 hectares within the eastern portion of the Abitibi Greenstone Belt in Québec, Canada. Additional information on Québec Nickel Corp. is available at www.quebecnickel.com.

Québec Nickel To Kick Off Its 2023 Drilling Program At Ducros 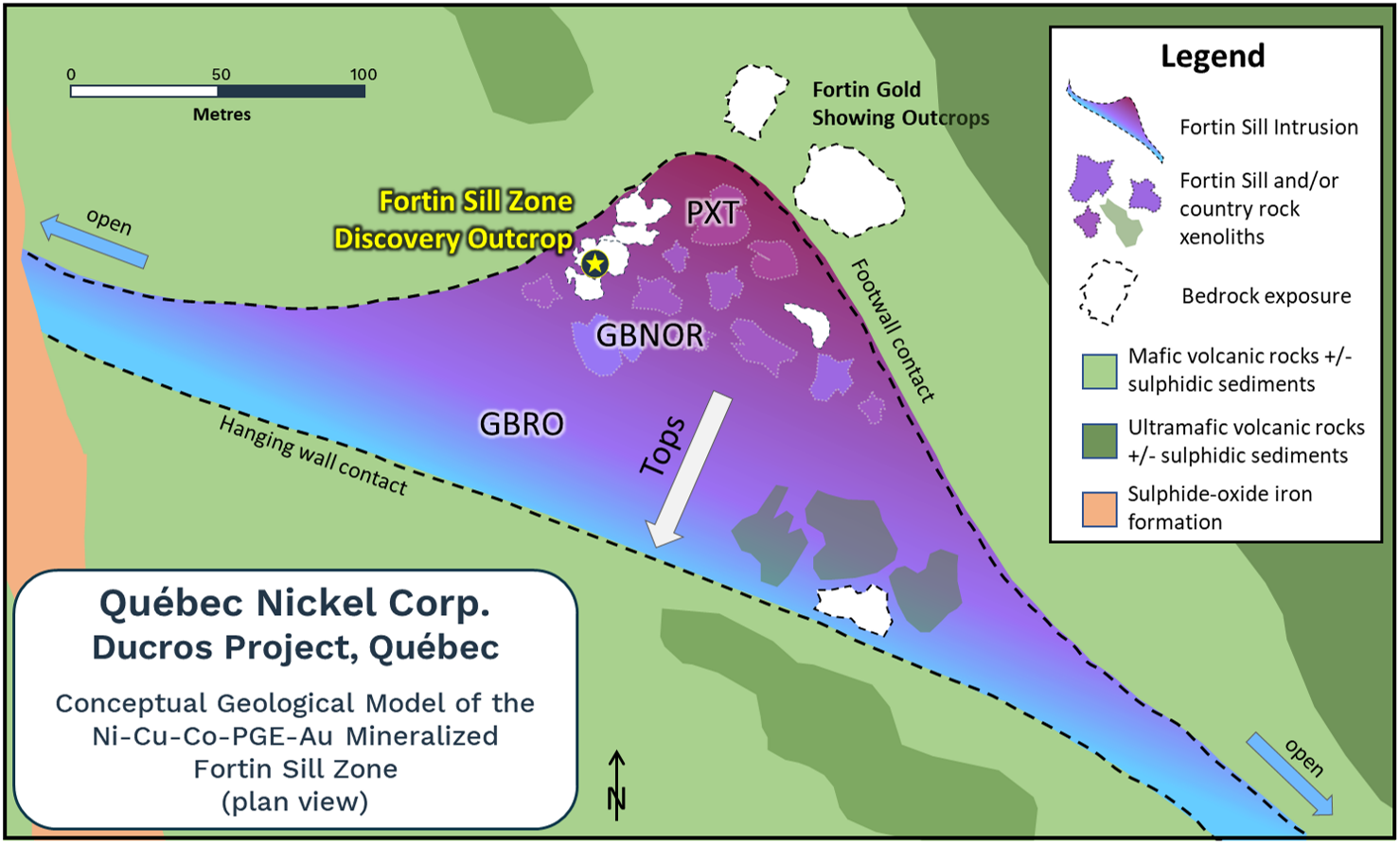